So I didn't do a lot of birding between my last post and going to the Scillies on Saturday 26th October, apart from a few counts on the estuary and stumbling across a Firecrest on a family walk at Tehidy. Anyway the annual trip to Scilly soon arrived and the Yorkshire contingency (adam Hutt, Nathan Pickering and Lizzie Bruce) duly arrived on the Friday evening and took over the cottage. We were all up and ready by 6.30am the following day, meeting up with the rest of the 'gang' on board the Sicklonian III at 0830. Mark Halliday and Ash Hugo in good time with Brad Dallas strolling up just as the gang-plank was being put away!!
The crossing was uneventful and the only highlight was a Short-eared Owl that flew low over the boat as we entered the roads, disappearing into the Pelistry area on St Mary's. Once the bags were dumped at the digs it was straight up to Longstones for a Scilly Tick in the form of a SUBALPINE WARBLER. The bird showed well on and off but spent long periods of time amongst the weeds on the deck.
The next few days were a wash out. High winds prevented us from visiting the off islands and trips out in between heavy showers yielded few opportunities to find your own stuff. I caught up with the RB Flycatcher at Lower Moors found on Sunday morning by Mark then the Rose-coloured Starling (at the Dump) and Spotted Crake (lower Moors) on Monday, with a couple of YB Warblers for good measure. 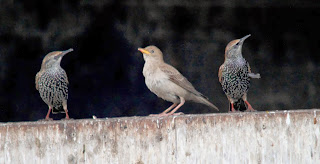 The weather finally broke on Tuesday and boats were running! Our first opportunity to get to St Agnes for the White's Thrush that had been showing to the lucky few who were staying in The Parsonage. A watch from our house (that overlooks The roads) before the boat set off produce a Spoonbill, Little Gull and the Bryher Hooded Crow mobbing a Raven! Once on St Agnes it was obvious we weren't going to see the Thrush and I wasn't prepared to stand in a gateway staring at a lawn all day! I did see a very showy PALLAS' WARBLER in the short time I did put in though! The DUSKY WARBLER at Covean put in a brief appearance after calling constantly for half an hour but the only other birds of interest were a Merlin and a Swallow. The island 'felt' good though. You know that 'there must be something here' type of feeling, so I made it my intention to return the following day.

This turned out to be a good decision and one I very nearly talked myself out of before the 1015am boat deadline. I had a pre-boat walk up Sunnyside trail and there were lots of birds. Plenty of common migrants in. Black Redstarts, Redwings, Chiffchaffs were in every hedgerow, unlike the previous four days and I considered staying on St Mary's. Until I checked the pager. PADDYFIELD WARBLER AT HIGHER TOWN was the message. This was to be a lifer for me having missed the Cornwall Bird in 2012. So it wasn't long before we were dodging the rain showers on St Agnes scanning the bracken from Paul Duke's accommodation garden (Thanks Paul!!). The bird didn't show for over an hour and I was becoming despondent. So I wandered off only to bump into Mark who said he'd had crippling views of it in an area I had walked past in my haste to get to Higher Town! Isn't that always the case! Anyway, it wasn't long before it showed again in much the same place as I had been looking for it. Superb little bird tho very mobile, it eventually flew across the main road and after showing again in the pitisporum it disappeared, never to be seen again.
After a walk round the coastal path from Covean I head back to the Parsonage where I met Ash and a rather flustered Mark who had just glimpsed head and shoulders of the elusive White's Thrush through a gap in the trees, on the lawn at the right of the Parsonage. I decided to stake it out, positioning myself furthest to the right looking over the Parsonage wall at a postage stamp size patch of lawn near a blue flowerpot that Mark had described was where he had seen the bird. And I waited, fixated on the spot with my bins. Nothing. I decided to get an elevated view by kneeling on the wall. Lifted me bins to focus on 'the spot' again. And there it was. Filling the hole between the eaves, WHITE'S THRUSH!!!! Holy Shit. There was that elated feeling that you only get from seeing a new, incredible, new bird. Not all new birds give you that feeling. But this one did. It was amazing. Amazing size, colour and dancing movement. I hardly dare breath but managed to get out the compulsary, "I'VE GOT IT!!". Then a mad battle with balance as I attempted to grab a quick photo of it through the foliage. The results you can see below. Not a clear sharp shot, but the best image of the week as far as I'm concerned! Thankfully the rest of the gathered birders managed to take it in turns to look through the gap and see the bird. The boat trip back was a much happier one than the previous day, aided no doubt by the three pints sunk in The Turks Head before departure! 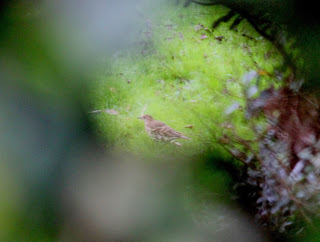 Thursday was to be our last full day as inclement weather was forecast for the Saturday and the Scillonian III was cancelled meaning an early departure on the Friday instead. The 'before the boat' stroll included a trip to The Dump where a reported Isabelline Shrike turned out to be a Red-backed. 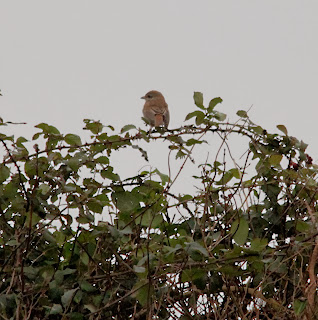 Nice all the same and the Rose-coloured Starling showed well again. I decided to spend the day on Tresco with Mark and Ash and met up with Falmouth based Sam Perfect on the boat across. He was hoping to connect the American Robin as a lifer whereas my main quarry was the reported Little Bunting at Borough Farm as I needed it as a Scilly Tick! There was no sign of either of the afore mentioned species so I went for a wander along the beach in front of the castle. Plenty of waders being disturbed by dog walkers here!! A male Snow Bunting flew from St Martin's and landed in the dunes a few hundred feet in front of me but I couldn't locate it. Then a first-winter Med Gull flew past. Nice place to sit and have lunch in. 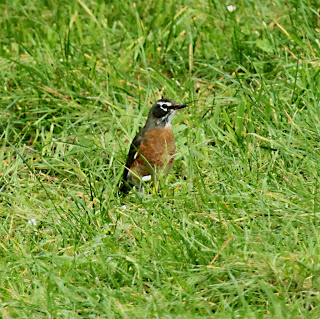 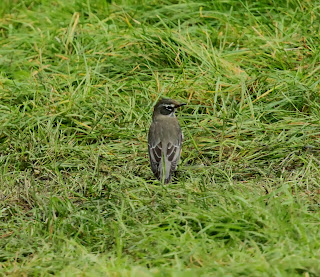 After a quick break I headed back to Rowesfield to find the others had been told the AMERICAN ROBIN was showing again. Indeed it was, in a muddy track in the middle of Rowesfield. Smart looking individual and the second one I've seen on Tresco. (I've seen 4 altogether for the record!) After shooting off a few snaps, including a couple using Ash's superdupa 300mm Canon monster I headed back towards Borough Farm where a nice Merlin showed well in the pine belt. See photo :-) 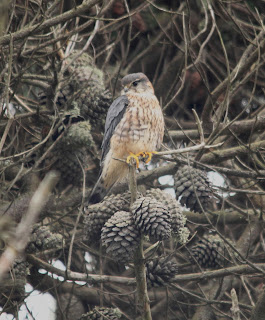 Ash and I then headed back for the boat, me reminiscing about the Blyth's Pipit I'd seen previously on the cricket pitch and as we stopped a Richard's Pipit got out of the long grass to the left of us and flew a short distance into field beyond the cattle shed. Ash managed a few long distance shots, but we couldn't relocate it for better images unfortunately and we were running out of time anyway. Nice end to the day, all the same.
The rest as they say is history. Bit of a short week but some fantastic birds and once again some great crack with the gang and other regulars of our Scilly week. Great to catch up with the Scilly birders, Spider, Higgo, Chris x2, Bob and Ash and of course Robin and big Al! And nice to see James and Emma packer and Dave and Kim Preece again, thanks for the company and laughs chaps!
Posted by Unknown at 08:11